People that have reached shocking heights and men that have muscles so huge that they are often referred to as The Hulk!

6. André The Giant
Real name André Roussimoff, he was born in France under Bulgarian and Polish ancestry. At a very early age, 12 to be exact, the symptoms of André’s gigantism were present as he stood at a towering height of 6’3” and weighed 240 pounds. He would later move to Paris and learn how to wrestle professionally by a local promoter who saw the potential that came with his enormous size of 7’4”. He ended up becoming one of the most recognizable faces in the wrestling world and would later take on an acting career, most famous for his role as Fezzik in the Princess Bride. Sadly he passed away in his sleep in 1993 due to congestive heart failure.

5. Yao Ming
Born on September 12, 1980, Yao Ming would also become a very famous basketball player in, not one, but two professional basketball leagues, the NBA, and the CBA. His unbelievable height of 7’6” made him the tallest active basketball player back in his last season of playing. He made the switch from the Chinese Basketball Association to the NBA in 2002 and would go on to play for the Houston Rockets. It was in 2011 that he announced his retirement from the league due to a string of foot and ankle related injuries that caused him to miss a total of 250 games in the last 6 seasons of his career. In 2014, he was inducted into the Naismith Memorial Basketball Hall of Fame.

4. Vikas Uppal
There is very little information as to regarding Vikas Uppal’s short life, though his claim as the tallest man is considered to be a contentious one. Uppal was born in the Rohtak district of Haryana back in 1986. Based on the speculation of the Indian newspaper The Tribune, they reported that he stood at around 8 feet and 3 inches when he was measured as a teenager, however, another news and entertainment website in India called Rediff.com stated that he was 8 feet and 10 inches back in 2005, which would have made him the second tallest man in history. Though most people generally accept that his height was 8 feet and 3 inches, Uppal sadly died on June 3, 2007, while under the knife as doctors were trying to remove a tumor in his brain.

3. Sajad Gharibi
The 24-year old Iranian strongman weighs in at an impressive 24 stones, which is 336 pounds, and is able to lift an incredible 386 pounds! That’s his own body weight with an additional 50 pounds. Sajad became an internet sensation when he began to gain attention for his large physique on several of his social media accounts. Since then, he’s racked up roughly 59,000 followers on his Instagram account where people have dubbed him the ‘real life Hulk” because of his somewhat uncanny resemblance to the popular character.

2. Brahim Takioullah
This man happens to be tied with the Iranian man, Morteza Mehrzad, as the second-tallest person in the world who is currently alive. However, he has the title of the “world’s largest feet on a living person” to himself with his feet measuring out at a length of over 15 inches and he has to wear special shoes that are custom made in order to support all of his weight. Brahim was born in Morocco back in 1982 where his size is directly linked to a tumor that affects his pituitary gland, like most people who were born abnormally tall. Basically, the tumor causes the body to have increased levels of growth hormone. Doctors first noticed his unusually large size when he was 18 and recommended that he get a blood test to see if the results would yield any answers. Like with most people who are this tall, he suffers from day to day problems that cause the quality of his life to not be ideal.

1. Sultan Kösen
Standing at a staggering height of 8 feet and 3 inches, the part-time farm laborer from Turkey holds the current title for the tallest living man in the world. Kösen’s enormous stature is due to a tumor that affects his pituitary gland, like many other of the world’s tallest people, and has been linked to the disorder acromegaly. It wasn’t until he was 10 years old that he would grow past 6 feet and from then on had to use crutches to walk. Because of this, he was unable to finish his education. In 2008, there was an attempt to remove the tumor in his brain, but it failed because of how deep the tumor was. It wasn’t until 2012 that he had a procedure that finally stopped his accelerated growth. He married his wife back in 2013 and their height difference isn’t much of a problem. It’s the fact that they don’t speak the same languages, she speaks Arabic and he speaks Turkish and Kurdish. Sultan recently joined the Magic Circus of Samoa after the director personally asked him to. 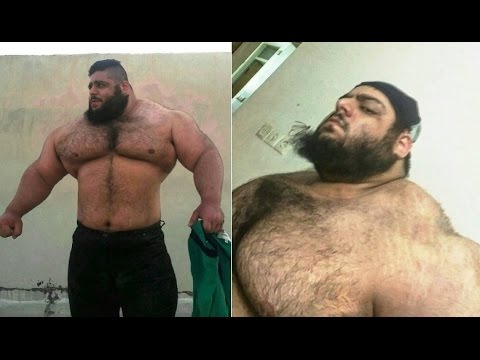 People that have reached shocking heights and men that have muscles so huge that they are often referred to as The Hulk! Subscribe to Talltanic http:/...