5. Alien structures found on Moon
Ufologists have found traces extraterrestrial civilizations on the Moon. New satellite images, allegedly taken by an orbital probe that has been orbiting the Earth's natural satellite for seven years, showed strange objects on the surface of the Moon.
"UFO catchers" studied the photos and found strange-looking "formations" on the Moon. Ufologists believe that the images captured the wreckage of an alien ship that crashed on the Moon. The researchers could also see a chain of footprints that lead to the mysterious object.

4. Alien Image found in the image of Nasa
These images, were taken from the NASA Curiosity Rover droid which is scouring the surface for signs of life - but appeared to have missed it, if the alien chasers are to be believed. In this image a head, torso and legs can clearly be distinguished."
Everything is there in the original image, whatever it is it looks humanoid, reminds me of the Atacama Alien, about the same size too, this one is around 6 inches."

3. Aliens may have sent a strong signal from sun like star
Astronomers engaged in the search for extraterrestrial intelligence (SETI) are training their instruments on a star around 94 light years from Earth after a very strong signal was detected by a Russian telescope.
An international team of researchers is now examining the radio signal and its star, HD 164595 -- described in a paper by Italian astronomer Claudio Maccone and others as a "strong candidate for SETI" -- in the hopes of determining its origin.
"The signal from HD 164595 is intriguing, because it comes from the vicinity of a sun-like star, and if it's artificial, its strength is great enough that it was clearly made by a civilization with capabilities beyond those of humankind," astronomer Douglas Vakoch, president of METI International, which searches for life beyond Earth, tells CNN. Whenever a strong signal is detected, "it's a good possibility for some nearby civilization to be detected," Maccone tells CNN.

2. Alien skeleton found on mars
A new image beamed back by the Curiosity rover is ultimate proof that the red planet had life in the distant past. new images show what appear to be fossilized remains of an Alien” creature on Mars.
Looking at the image I have to say they look a bit strange, but, does strange mean Alien? Well… lets not jump to conclusions.
"The relic has a large skull adorned with an ornate or decorative head piece, this could indicate that its the remains of a king, religious icon or perhaps a fallen warrior,"

Mark Sawalha, a UFO hunter based in Finland, spotted a 'strange spike' in a Nasa photo of the lunar surface. He claims is an alien antenna that could be located on the roof of an alien base.
'Aliens are using moon minerals and they have bases there too. Many other findings support this theory,' Mr Sawalha he told the Sun.

While he does not spell out what these findings are, the UFO spotter claims that Nasa knows about them and has chosen not to publish them.
He also speculates that the presence of aliens on the lunar surface may be the reason that Nasa hasn't sent any manned spacecraft to Earth's satellite since the Apollo missions.
The images, captured by the space agency's Lunar Orbiter, appear to show a small dark 'spike' that casts a shadow. Along with a mysterious antenna-like spike, zooming in on the photo also appears to reveal a 'clear plateau' under the antenna. 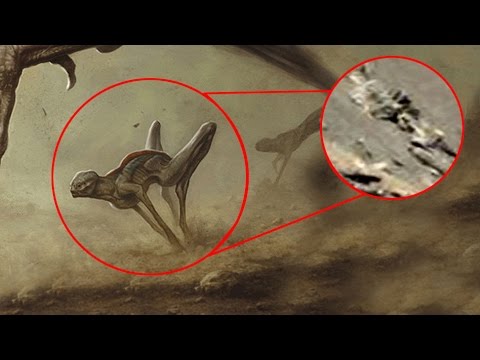