On 14 June, J.B. Foster ranch foreman William Brazel found a ‘large area of bright wreckage made up of rubber strips, tinfoil, a rather tough paper and sticks’. Thinking little of it, he didn’t collect the debris until 4 July and only informed the local Sheriff on 7 July after hearing reports of ‘flying discs’.

In the meantime, the RAAF issued the press release detailing the recovery of the ‘flying disc’. The local newspaper, the Roswell Daily Record, featured the story on their front page in what is believed to be the first use of the term ‘flying saucer’. On the same day an FBI telex from Fort Worth stated that the object resembled ‘a high altitude weather balloon with a radar reflector’. This led to less sensationalist newspaper reports the next day.

Interest in the Roswell discovery subsided until UFO researchers in the late 1970s began interviewing people who claimed to have connections with the 1947 events. Numerous books followed, to which the Air Force responded by releasing two reports beginning with The Roswell Report: Fact vs. Fiction in the New Mexico Desert in 1994. These concluded that the debris was from Project Mogul, a top secret project by the US Army Air Force, which was designed to detect Soviet atomic bomb tests. 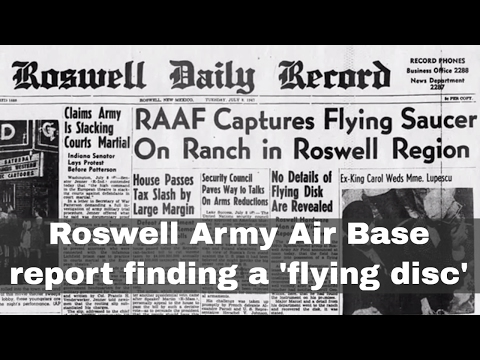 On 14 June, J.B. Foster ranch foreman William Brazel found a ‘large area of bright wreckage made up of rubber strips, tinfoil, a rather tough paper an...