American soldiers serving in the province of Kandahar were drawn into a firefight of biblical proportions. The enemy force was a single man armed only with a pike. The man was of an ancient race so large, that his measurements would soon be officially recorded for the first time since the writings of the old testament.

Afghanistan, 2002. A patrol of U.S. Marines goes missing in a remote area of Kandahar. A second unit of the Special Forces is flown miles from the nearest village and deposited at the last reported rally point of the missing patrol. They follow its trail on land for only a few kilometers when they find themselves descending the side of a mountain.

The Marines travel single-file following a narrow path, centuries-old, made by goats, which brings them to the mouth of a cave in the mountainside. The lieutenant in command was puzzled by the unusual amount of loose rock or rubble in front of the cave, when he saw the rocks were mixed... with fragments of bone. Staff sergeant DePaula was the man who found the field radio belonging to the unit which had vanished. It was crushed like an empty pack of cigarettes.

They were looking at the site of an ambush. The LT immediately commanded his men to disperse and it was his quick thinking that saved most of the men from the thing that now burst out of the cave. It was so large, and moving so fast that for some odd reason, Sergeant DePaula thought it might be an elephant.

It looked like a man but it was 12 to 15 feet tall, with a red beard and flaming red hair down to its shoulders. They were taken by surprise and nobody moved until Corporal Markowitz charged it, firing his M4. Their Special Forces training and muscle memory took over, and the rest of the men emptied their weapons into the giant's gut.

The titan was bellowing and it took out Markowitz by thrusting a spear clean through the soldier's torso. Then DePaula called out, "Shoot him in the face!" The other troops took up the same call at the top of their lungs. The primitive looking hulk took multiple hits from M4's and 308's, none of which was slowing him down. He still had the first soldier on the end of his pike.

Suddenly the giant stopped moving and blinked his eyes as if confused. Then he collapsed and the ground shook. The titan was finally dead. The entire engagement had taken less than a minute.

After the Lieutenant radioed in their position, a CH 47 helicopter arrived. It could not land on the side of a mountain but it dropped a cargo net on a line, and the men were ordered to roll the giant onto the net, which required the strength of two squads to accomplish. It smelled... like a combination of a skunk and a rotten corpse.

The huge body was flown to a local airstrip, where it was transferred to the loading bay of C-130 cargo plane for transport to a base in Europe. The Air Force pilot of this plane observed six toes on each foot of the beast and six fingers on each hand, which was first recorded of giant men more than two thousand years ago in First Chronicles, chapter 20, verse 6. Its fingernails were pointed, the pilot says, and its heels were wrapped with skin or canvas similar to a moccasin. Its odor was overpowering, as if it had avoided taking a bath for a decade. Also the pilot estimated its weight at 1100 pounds... over half a ton.

Chain of command insisted the Special Forces unit re-write their after-action reports to eliminate any reference to the size of the creature.

Today the military denies this confrontation ever took place. Even the death record of corporal Markowitz has been "covered up". But this event is said to explain why, when U.S. combatants are trained in cave fighting, instead of aiming for center mass they are instructed to aim high, in order to target the face of the enemy. 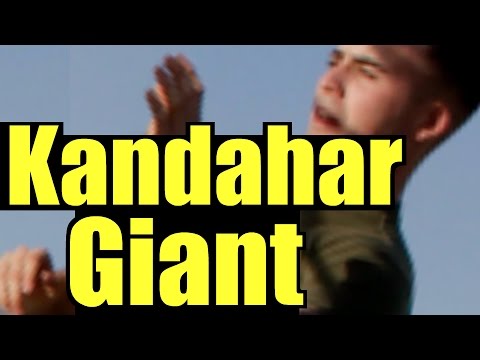 American soldiers serving in the province of Kandahar were drawn into a firefight of biblical proportions. The enemy force was a single man armed only...