Top 4 reasons why giants lived among us in ancient history.

# 1- Evidence of Giants found, and the mystery of giant human skulls.They are present in nearly every culture worldwide. From Europe, Eastern Europe and Africa to the United States.

Not only mentioned in many religious texts, such as the Bible and the Torah, for example King Og, written about in Deuteronomy, who was said to have been at least 12 feet tall.

Many ancient historians, such as Herodotus and Pliny the elder, also described them in great detail in their works as well.

They were written about in the legends of people worldwide. From the evidence of Goliath to he Paiute Indians, for example, of Nevada spoke of a race of red-haired giants, called the si-te-cah, that were 7-10 feet tall. They were said to be cannibals that preyed on the native population.

That is until, according to their history, they chased them into a cave, the same cave in which their remains were found centuries later, and lit a very large fire at the mouth of that cave to suffocate them inside. All of the skeletons found inside had long red hair.

# 2 - Giant Bones Found:
The bones are also found worldwide. Hundreds of skeletons have been found all over Europe, Africa, the Middle East as well as the United States.

Some ranging in height from 7-12 feet tall. And some even possibly taller. In the late 1950's a 15 foot skeleton was found in Turkey. Whose skull alone was 3 times the size of a normal human skull.

While other, even larger skeletons have been unearthed, though little physical evidence still remains for the skeletons found in the Middle Ages, some reports put them at around 19 1/2 - 26 1/2 feet tall.

Although, the remains of 2 separate giants that stood around 36 feet tall were found in North Africa around 2500 years ago.

But how does this all tie into the great pyramid? Take a moment and do me a favor and hit the subscribe button.
Maybe it was these Giants who helped build the pyramids. The enormous blocks to us must have seemed like footrests to these gigantic humans.

In May of 1912, around lake Delavan in Wisconsin, giant bones were unearthed that stood 7.5-10 feet tall. They were even put on public display before they were taken down and "lost".

# 3 -
The amount of bones found show that the extreme height was not an anomaly.
Most people today that are extremely tall have problems that are directly related to their height.

The tallest person, Robert Wadlow, ever to live was nearly 9 feet tall but had many physical problems, such as weak bones and joints and was unable to do even the most basic things that we, average sized people do everyday.

Thousands of giant bones have been uncovered worldwide with at least 60 specimens alone being taken from Lovelock cave in Nevada, and another 18 from Wisconsin. And that's just in North America.

There are even reports of giants being found in Greece that have only 1 eye socket, matching the legends of Cyclops.

We are still finding them even today with recent discoveries made in Croatia.

# 4 - Science cover-up carbon dating evidence
These bones have all been carbon dated, just like all the bones they find that they tell us about.

The difference is that, since these bones do not fit into the traditional timeline they are kept from the public. Locked away in the basements of many museums around the world.

These bones range in age from a few hundred years to several thousand years old. Carbon dating is only used when it fits the accepted timeline.

Unfortunately when fossils are found that don't match up they just sweep them under the rug.
And keep them hidden from the eyes of curious minds. 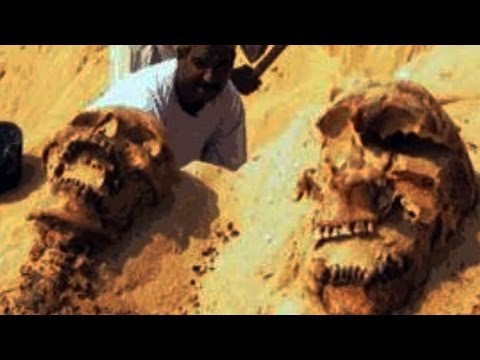