Battlefield ER: The brutal life of a warzone medic

The Golden Hour - US medics face a perpetual job of trying to keep casualties alive in the first vital hour after being wounded by the Taliban. Subscribe to Journeyman here: http://www.youtube.com/subscription_center?add_user=journeymanpictures

In the heart of Taliban territory, a talented and youthful team of medics race against the clock to save a constant stream of casualties, bracing themselves for the bloody consequences of the imminent 'surge'.

Welcome to M*A*S*H 2010, where a brave medical team are on 24 hour alert. "We're the busiest Forward Surgical Team in Iraq and Afghanistan". In the next moment, the alarm sounds and the medivac helicopter is taking off. "Is it a US...an Afghan...a child?", asks the pilot, as a giant smoke cloud from an exploded mine-resistant vehicle comes into view. Two American soldiers have been killed and three wounded by an IED. All are loaded onto the helicopters and the golden hour in which they can be saved, begins..."We provide 21st century intensive care", shouts Major Bryan over the blood-curdling screams of the injured. Yet behind the brave faces, doubts and fears creep in. Arm wrestling and watching DVD's, don't relieve the combat stress of soldiers who have served in Iraq before this. "It's not clear to me that we have an overall endpoint that makes sense", says Major Hueman. In just 10 months this small tented hospital has received a staggering 600 trauma cases. It's about to get a lot busier.

Journeyman Pictures is your independent source for the world's most powerful films, exploring the burning issues of today. We represent stories from the world's top producers, with brand new content coming in all the time. On our channel you'll find outstanding and controversial journalism covering any global subject you can imagine wanting to know about.

Battlefield ER: The brutal life of a warzone medic 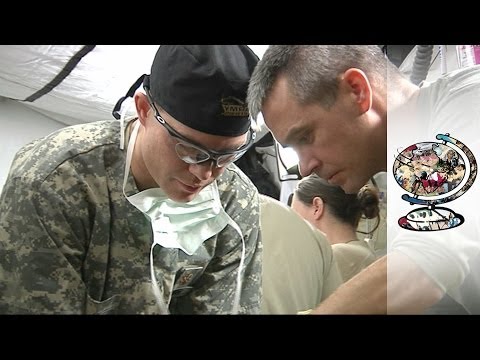 The Golden Hour - US medics face a perpetual job of trying to keep casualties alive in the first vital hour after being wounded by the Taliban. Subscr...