This is Mahabalipuram in India and let's take a look at this unexplainable rock structure called Bhima’s stove. Locals believe that it was built by a Giant who was more than 12 feet tall and I will show you some solid evidence that it was in fact built by a Giant. But first, let’s see if this structure could have been built by humans at all.
The specialty of this structure is that the rock on the left which weighs a massive 1700 tons has been lifted and made to lean on a relatively smaller rock on the right.

Archaeologists and geologists agree that this is not a natural formation, but was constructed at least 1200 years ago. But how could ancient human beings lift a rock that weighs 1700 tons? It is a massive 47 feet long and 22 feet wide and you can see human beings walking through this artificial cave like structure. 1700 tons is a whopping three million pounds or one and a half million kilograms.

Scientists calculate that an average human being can lift about 200 pounds. Using this math, more than 16,000 men should have worked around this rock to lift it. But how do you put 16,000 men around a rock that is only 47 feet long? Even in modern days, lifting such a heavy rock would be very hard and can be possible only with the help of complex machinery like cranes. Even the regular cranes we use today, can lift around 20 tons and 85 cranes should work together to lift this rock.

Some historians claim that elephants were used to lift this rock. This is also impossible because an elephant can push or pull 6 tons which means that 280 elephants would have to be used together around a 47 feet rock.

Since archeologists cannot explain how it was constructed, is there any other explanation for this megalithic construction and more importantly why do the locals call it Bhima's stove? Bhima is portrayed as a Giant who was over 12 feet tall and appears in the Hindu epic of Mahabharata written around 500 B.C. Bhima fits the classic description of a Nephilim mentioned in the Bible because he was born to a human mother and his father was a God.

Legend says that after putting these giant rocks together, Bhima placed this shiny disk like rock inside and set it on fire. And on top of this structure, he placed a large metallic object and performed some kind of an experiment. Since the entire set up resembles an early cooking method, it came to be known as “Bhima’s stove”. On the inner walls of this structure, you can still see traces of black soot confirming that a large fire was created inside.
Is this just a local legend concocted by a bunch of primitive minds or is there any evidence of such a meeting between Bhima and the reptilian Gods? In the Hindu epic Mahabharata, such a meeting is
If it is true that Giants or Nephilims once existed among ancient Hindus, shouldn’t archeologists have unearthed some giant skeletons in India? After all, the Hindu epic Mahabharata says that Bhima had at least three wives and fathered many children. On 5th February 2013, a giant skeleton which was seven and a half feet tall was excavated in Bhubaneswar, Odisha. Archeologists quickly moved this enormous skeleton to a secret location and this remarkable discovery was never published in the media. However, archeologists accidentally told the media about this giant skeleton, when a normal sized skeleton was discovered a month later. There are many hoaxes about Nephilim skeletons, but this is a genuine piece that was published in a newspaper called “The Telegraph” which has more than a million readers.

Remember: the average height of an Indian male is five and a half feet, so a seven and a half feet skeleton would be have been a spectacular finding. So why don’t Indian archeologists tell the media when such Giant skeletons are discovered? Officials say that such sensational news quickly spreads and thousands of people would gather and looters would ransack the entire place. In fact, such an incident happened just a few months ago in Meerut, Uttar Pradesh. Intriguingly, the 2500 year old scripture Mahabharata says that Bhima lived in a city called Hastinapur, which is now located in the district of Meerut. On August 8th, 2014 a skeleton was accidentally discovered by miners. Locals say that this skeleton was over 15 feet tall and was covered with metal ornaments and had a crown on its head. Word quickly spread that Bhima’s skeleton was found and before the police could reach this site, looters had taken away the giant skeleton and the ornaments leaving just a few fragments behind. Is it possible that this was the skeleton of Bhima or one of his descendants? 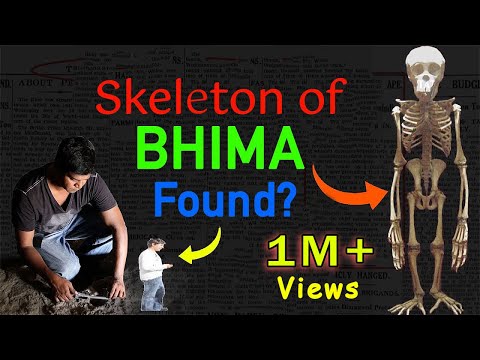