BOOK OF ENOCH/THE NEPHILIM GIANTS/CHILDREN OF THE FALLEN ANGELS (GENESIS 6:4)

(Genesis 6:4) "There were (GIANTS) in the earth in those days; and also after that, when the "Sons of God" [MEANING FALLEN ANGELS] came in unto the daughters of men, and they bare children to them, the same became mighty men which were of old, men of renown"

-CONFIRMATION OF WHO THE "SONS OF GOD" ARE: (Job 1:6) “Now there was a day when the Sons of God [MEANING ANGELS] came to present themselves before the LORD, and Satan came also among them”

-CONFIRMATION OF WHO THE "SONS OF GOD" ARE: (Job 2:1) “Again there was a day when the Sons of God [MEANING ANGELS] came to present themselves before the LORD, and Satan came also among them to present himself before the LORD"

-CONFIRMATION OF WHO THE "SONS OF GOD" ARE: (Job 38:7) “When the morning stars sang together, and all the Sons of God [MEANING ANGELS] shouted for joy?”

(Enoch 6:1-2) "And it came to pass when the children of men had multiplied that in those days were born unto them beautiful and comely daughters. And the (ANGELS), the children of the Heaven, saw and lusted after them, and said to one another: 'Come, let us choose us wives from among the children of men and (BEGET US CHILDREN)"

(Jude 6-7) “And (THE ANGELS WHICH KEPT NOT THEIR FIRST ESTATE, BUT LEFT THEIR OWN HABITATION), he hath reserved in everlasting chains under darkness unto the judgment of the great day. Even as Sodom and Gomorrha, and the cities about them in like manner, (GIVING THEMSELVES OVER TO FORNICATION, AND GOING AFTER STRANGE FLESH), are set forth for an example, suffering the vengeance of eternal fire”

(2 Peter 2:4-5) “For if God (SPARED NOT THE ANGELS THAT SINNED, BUT CAST THEM DOWN TO HELL, AND DELIVERED THEM INTO CHAINS OF DARKNESS), to be reserved unto judgment; And spared not the old world, but saved Noah the eighth person, a preacher of righteousness, bringing in the flood upon the world of the ungodly”

(Numbers 13:33) “And there we saw the (GIANTS), the sons of Anak, which come of the giants: and (WE WERE LIKE GRASSHOPPERS IN OUR OWN SIGHT, AND SO WE WERE IN THERE SIGHT)”

(Amos 2:9) “Yet it was I who destroyed the Amorite before them, (WHOSE HEIGHT WAS LIKE THE HEIGHT OF THE CEDARS), And he was as strong as the oaks; Yet I destroyed his fruit above And his roots beneath”

(Enoch 15:8) “Now the (GIANTS), who have been born of spirit and of flesh, shall be called upon earth evil spirits, and on earth shall be their habitation. Evil spirits shall proceed from their flesh, because they were created from above; from the holy Watchers was their beginning and primary foundation. Evil spirits shall they be upon earth, and the spirits of the wicked shall they be called. The habitation of the spirits of heaven shall be in heaven; but upon earth shall be the habitation of terrestrial spirits [MEANING WHAT WE CALL UFO'S/DEMONS], who are born on Earth”

Demons [MEANING EARTHLY SPIRITS] are not people that have passed away but rather the Nephilim giants that were conceived without souls. Their roaming spirits is where we get demon possessions or manifestations. They were the main reason the Lord sent the flood of Noah's day. Their spirits have been bound on this earthly plain since the flood and will continue to be here until judgment day. Those whom are bound in the Euphrates are the FALLEN ANGELS that left their "proper dwelling" and came unto the daughters of men (JUDE 1:6-7/GENESIS 6:4). They have been bound and imprisoned there since then to be released upon the world during the tribulation period as part of the coming trumpet judgments (REVELATION 9:14). Again, the children of these fallen angels are the spirits that are roaming this earthly plain which we call demons (ENOCH 15:8).

The (BOOK OF ENOCH) is within the “Dead Sea Scrolls” that was found in a remote Judean Desert cave in 1947 & is widely considered the greatest archaeological event of the twentieth century. They are on display for the world to see in Israel which can also be viewed online. Bedouin treasure hunters and archaeologists ultimately found the remains of hundreds of ancient scrolls. These fragile pieces of parchment and papyrus, including the oldest existing copies of the Hebrew Bible, were preserved for two thousand years by the hot, dry desert climate and the darkness of the caves where they were placed. http://www.deadseascrolls.org.il/featured-scrolls

BOOK OF ENOCH/THE NEPHILIM GIANTS/CHILDREN OF THE FALLEN ANGELS (GENESIS 6:4) 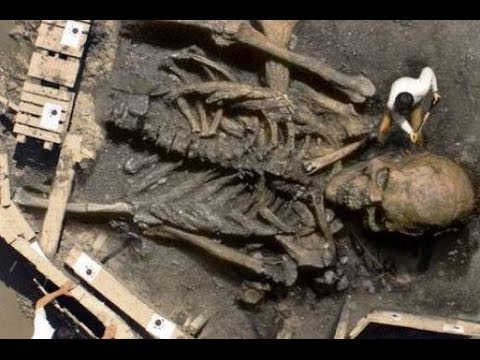 (Genesis 6:4) "There were (GIANTS) in the earth in those days; and also after that, when the "Sons of God" [MEANING FALLEN ANGELS] came...