Coffins of killed US soldiers in Kandahar

STORYLINE:
Draped in the stars and stripes the coffins of two US soldiers killed in southern Afghanistan were airlifted home, on Sunday.

The Pentagon identified one of the slain Americans as Staff Sergeant Jacob L. Frazier, aged 24, of St Charles, Illinois, who was assigned to the 169th Air Support Operations Squadron, 182nd Airlift Wing.

The other casualties were not immediately named.

They killed when four gunmen on motorcycles ambushed a U.S. military reconnaissance patrol in southern Afghanistan on Saturday. Another American and three Afghan soldiers were wounded.

The ambush attack was the first fatal encounter for US forces in this country since December, but came just two days after a Red Cross worker was killed in southern Afghanistan in what could signal a resurgence of activity by holdout fighters of the former Taliban regime.

Meanwhile, rebel fighters fired more than a dozen rockets and mortars at US military positions in eastern Afghanistan, on Sunday.

In recent interviews with The Associated Press, Taliban loyalists warned of stepped-up attacks once the war in Iraq began.

Saturday's deaths bring to 18 the number of US forces killed in combat in Afghanistan.

Coffins of killed US soldiers in Kandahar 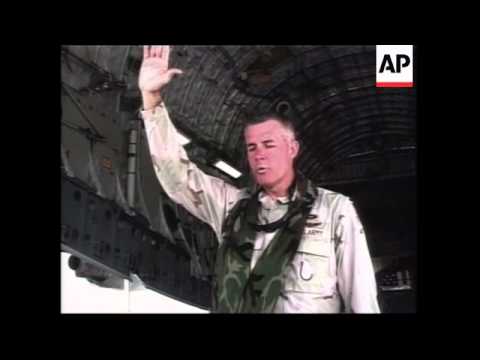