Proof That Giants Once Existed?

Have we found enough proof to conclude that giants were once among us? There is plenty of mysterious and unexplained evidence that might prove the existence of giants. Join us as we look at a few discoveries that might proof that giants existed.


Lord of The Rings is a nice read on its own it might enhance your experience to know that some aspects of the books might be more a little more fact than fiction.

The Giants Of Ecuador
In 2013 after heavy storms in Ecuador and Peru, a large female skull was found in the Loja province. The skull was dated by scientists and determined to be approximately 600 years old. The discovery of the skull sparked interest in finding the rest of the remains.

Kentucky Dover Mound
Since the late 19th century there have been many alleged discoveries of skeletal remains from so called giants. Many have been debunked but that still left more than enough separate discoveries to bring about suspicion of their existence. One of the stranger finds took place in Kentucky at the Dover Mound. The Dover Mound is a large Native American burial ground where some of the most strange physical and genetic anomalies have been discovered. One of these anomalies was the skeleton of a 7-foot male Adena man.

The Lovelock Cave
You would think by having Area 51 within your state lines you might just have your fill of the weird but that doesn't seem to be the case for Nevada. 20 miles south of Lovelock, Nevada there are caves that have been caught the eye of the world for over 100 years. The first strange reports from the area came in 1882 from a Native American tribe called the Paiute.

The New York Giants
While the giants we are going to be talking about have no relation to the Eli Manning and his band of Cro-magnon the coincidence is entertaining. In 1871 in the town of Cayuga the local newspaper reported on an archaeological dig that was taking place at the local Native American burial grounds. The dig gained media attention when visitors claimed that they saw giant skeletons being raised from the ground by the archaeologists.

The Giants Of The Caucasus Mountains
The generally uninteresting Caucas mountains have gained attention in recent years because of the alleged cave of giants found in 2008. The interest began in 2008 when a Georgian researcher by the name of Professor Vekua began researching the area. Vekua was a respected paleontologist best known for his work with the Homo Erectus Georgicus at the Dmanisi archaeological site.

Giant Footprints
One of the most cliché and but possibly best forms evidence that suggests the existence of giants are large footprints. There have been so many giant footprints that have been found over the centuries that it has been suggested that giants once walked the earth in large numbers.

One of the most famous giant footprints was found outside of Mpuluzi, South Africa. It was found over 100 years ago by hunter a hunter named Stoffel Coetzee. Locals named it the Footprint of God. The print has been a point of interest to many religious groups who believe that the print belongs to Goliath. The print measure 1.2 meters long.

Around the world, there have been similar footprints that have been found embedded in age-old rocks. In San José, a 2.5-meter footprint was found near a local ranch. In the same city, another 1.5-meter footprint was found on a cliff. Foreign explorers found a footprint twice the size of an average human's foot near a remote Chinese village. While these footprints are not proof that giants exist it does pose a challenging thought about how so many of these human-like impressions have been found around the world.

These have been a just a few discoveries from around the world that suggest that giants once walked among us. While we may never be able to definitively prove the existence of giants until we catch one history has given us plenty of reason to believe that lived and still may live on this earth.

Proof That Giants Once Existed? 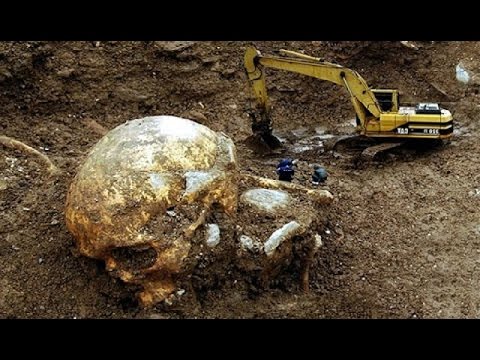 Have we found enough proof to conclude that giants were once among us? There is plenty of mysterious and unexplained evidence that might prove the exi...