A lot of you guys have been sending me pictures of giant skeletons lately.

Bills channel viewers like Jack Garbutt, Vidal Figueroa, Amar Taha, and Brandon Rhodes have all alerted me to these photos. Most of them show ancient giants being dug up by scientists all over the world.

But are these pictures real? Or are they fake. That’s what everyone seems to be asking!

The first thing I did, was just do a general search to see how much of this stuff is out there. It wasn’t a truck load, but then it wasn’t just one or two.

Now I can’t really tell you whether all of them are fake or real. I can only go with specific pictures one at a time, otherwise I would be just giving you an opinion.

First off, let’s just take a look at this picture. This claims to be a photo of an ancient giant that was dug up by the National Geographic Society in India. It was reported in the Hindu Voice Newspaper as real, but it is it?

I have the answer right here… so what do you think? Write it down on a piece of paper right now so you can’t lie about it later!

Ok here we go. The picture reported in the Indian newspaper as a giant skeleton dug up but the National Geographic Society is… A fake.

Shocking… but what I love is the story behind this one.

When national geographic got wind of this story, not only did they deny it, but they put their researchers on it and got to the bottom of it. Then they published a big article about how they were the victim of a hoax ( it’s not nice to fool Nat Geo).

In their article, Nat Geo traced the photo back to a photoshop contest on a website called worth1000.com. The goal was to come up with the best fake pictures of “Archaeological Anomalies.”

this picture, called Giants was created by a photoshop artist using the handle, Ironkite, and it won 3 place in the contest.

Ironkite wouldn’t tell Natgeo his real name but he did reveal the secrets of how he created the fake picture.

He first started out with ta real picture like this of a mastodon excavation in the United States… He then digitally superimposed a human skeleton over the beast’s remains.

After that, he added a man digging….

Now if you look very closely, Ironkite had some problem with the shovel here, so he had to remove part of it. In the end the guy just ends up holding a stick.

I guess all the newspapers that published the photo didn’t look close enough to notice that.

Ok, so that is all the time I have for this video. I know there are dozens more of these photos out there… so send me your favorites to bills channel@gmail.com and maybe I’ll investigate a few more! 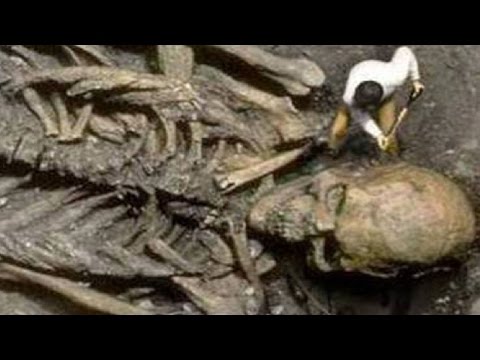 A lot of you guys have been sending me pictures of giant skeletons lately. Bills channel viewers like Jack Garbutt, Vidal Figueroa, Amar Taha, and Bra...