Secret Military Cover Up: Was There A Giant Of Kandahar Killed?

In 2002 It Is Believed That A 12', 1100 lb Red-Headed, Six-Toed, Six-Fingered Female, Giant Was Killed In Afghanistan By A Special Force Team, That Was On Special Assignment In Afghanistan. It is Believed That A Marine Was Killed During The Surprise Attack. The Giant Came Out Of A Cave With A Pipe Weapon And Was Shot And Killed, By The Other Marines. It Is Also Believed That When It Was Reported, That They Din't Want Information Getting Out.
It is believed that the giant was 3x times the size of a man or about 18-20 tall, when the creature came out of the mouth of a large cave with a long beard, wearing ancient clothing. The giant also had weapons of a "Pipe Weapon" or "Split-pole" with a 3 ft sharp lance attached to a 10-ft pole. The Giant came out of the cave and stood over the soliders on a ledge above, the cave before jumping down off the ledge, in front of the navy seals. The remains of the first soliders or "The meat" was still hanging off the bones, mixed with rocks, in front of the cave. The 2nd group of soliders first thought they were ambushed by a group of wild animals. The area were this took place was a dead end area, off the side of a afghanistan mountain out in the middle of no where, and there was a sheer drop off to the valley below which was about 800 to 1000 ft below.
Corporal Makowitz was the first to move and shoot, at the giant, but was "skewered" by the giant. The other soliders were able to take down the beast after a 45-60 sec head-to-head battle, after Sergent Depaula ordered the other soliders to "Shoot the Giant In The Face". The giant was able to hurt some of the soliders by "Stabbing" them with a technique with the back of the split-pole. The giant fell after about a minute and shook the ground, and the ordeal was finally over. The Giant had marks on it's body as if it had been shot before, but it looked like it din't hurt the giant. The giant also had a terrible smell so bad that the soldiers weren't even able to get close to move the huge corpse. It is also believed that the soliders thought that other giants were close by in the surrounding area. They were cannibals, and the locals knew about the giants.

Secret Military Cover Up: Was There A Giant Of Kandahar Killed? 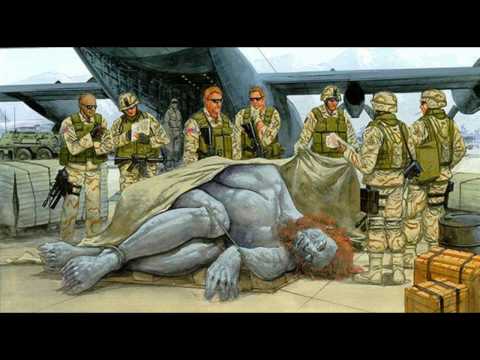