"The Island of the Giants" - Amerigo Vespucci year 1499

The island contains many animals of various sorts, and much water in swamps, and seeing that it offered no profit whatever, we departed and went to another island. We found that this other island was inhabited by very tall people. We landed to see whether there was any fresh water, and not thinking it was inhabited, as we had not seen anyone, we came upon very large footprints in the sand, as we were walking along the beach. We judged that if the other measurements were in proportion to those of their feet, they must be very tall. Going in search, we came into a road which led inland. There were nine of us. Judging that there could not be many inhabitants, as the island was small, we walked over it to see what sort of people they were. When we had gone about a league we saw five huts, which appeared to be uninhabited, in a valley, and we went to them. But we only found five women, two old, and three children of such lofty stature that, for the wonder of the thing, we wanted to keep them. When they saw us they were so frightened that they had not the power to run away. The two old women began to invite us with words, and to set before us many things, and took us into a hut. They were taller than a large man who may well be tall, such as was Francesco degli Albizi, but better proportioned. Our intention was to take the young girls by force, and to bring them to Castille as a wonderful thing. While we were forming this design there entered by the door of the hut as many as thirty-six men, much bigger than the women, and so well made that it was a rare thing to behold them. They, in like manner, put us into such a state of perturbation that we rather wished we were on board, than having dealings with such people. They carried very large bows and arrows, and great clubs with knobs. They talked among themselves in a tone as if they wished to destroy us. Seeing ourselves in such danger, we made various suggestions one to another. Some proposed that we should attack them in the hut, and others said that it would be better to do so outside, while others advised that we should not take any action until we saw what the natives were going to do. We at last agreed to go out of the hut, and walk away in the direction of the ships as if nothing had happened, and this we did. Having taken our route to return to the ships, they also came along behind us at a distance of about a stone's throw, talking among themselves. I believe they had not less fear of us than we of them; for sometimes we stopped to rest, and they did so also without coming nearer. At last we came to the beach, where the boats where waiting for us. We got in, and, when we were some way from the shore, the natives rushed down and shot many arrows; but we then had little fear of them. We replied with two bombard-shots, more to frighten them than to do them harm. They all fled into the woods, and so we took leave of them, thankful to escape after a dangerous adventure. They all went naked like the others. We called this island the Island of the Giants, by reason of their stature.

"The Island of the Giants" - Amerigo Vespucci year 1499 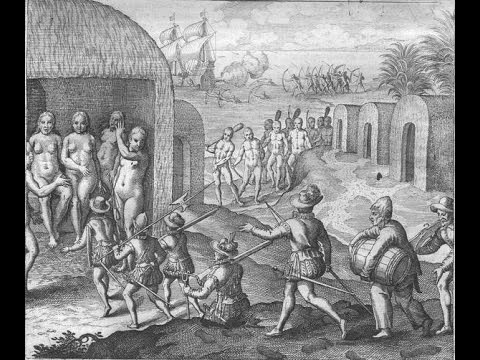 The island contains many animals of various sorts, and much water in swamps, and seeing that it offered no profit whatever, we departed and went to an...