"The Tule Eaters"
In 1977, archaeologists in Poland, discovered the astonishing remains of what has now been confirmed was a medieval, female giant. It is surprising that the remains survived long enough to be confirmed as an anomaly, without mysteriously going missing. but measuring only 7 foot 2 inches, it may have been presumed that she was just abnormally large.
Examinations of her remains, still in situ, have concluded that she was thrown into her burial site without much care, as if hunted, killed and buried. she has been named Ostrów Tumski, and her remains are located on a lake island, half-hour drive from Poznan, the island includes an ancient palace, church and fortifications. The island has been inhabited since the late Stone Age and the ruins are shrouded in legend. One intriguing ancient story tells of an unknown king, who rests together with his knights at the bottom of the lake.

While all other burials in the islands cemetery are made with the head facing west, this giant woman was buried facing in the opposite direction.
Maybe they believed her kind to be cursed.


Many ancient tribes, and cultures still retain stories, about a long-forgotten existence of a race of humans, that were much taller and stronger than ordinary men. These giants are described as both brave and barbaric, and legends often mention their cruelty. plenty of these tales can be found in south america.
The Paiute, a tribe from the Nevada region thousands of years ago, had a legend about a race of red-haired giants called the Si-Te-Cah. The ancestors of the Paiute described them as savage and inhospitable cannibals.
In the Northern Paiute language, ‘Si-Te-Cah. ’ literally means tule eaters. the Legend states that the giants came from a distant land, crossing the ocean on rafts built out of the tule plant.
this legend repeats itself all over the Americas,
In the sixteenth century, Pedro Cieza de León recorded an ancient Peruvian tale, regarding the origin of the South American giants.
According to locals, they also came by sea in rafts of reeds, some of the men were so tall that from the knee down they were as big as an ordinary man. 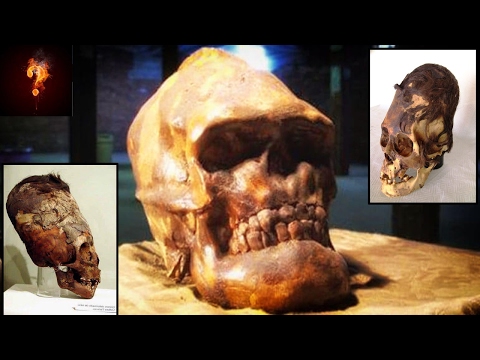 "The Tule Eaters" In 1977, archaeologists in Poland, discovered the astonishing remains of what has now been confirmed was a medieval, femal...